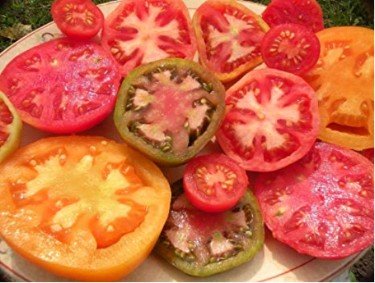 Seeds labeled as GMOs, an acronym for “genetically modified organism”, is an offshoot of one of the most controversial practices in the industry.

GMO seeds are not grown in a garden, but in a laboratory that uses modernized biotechnology techniques, such as gene processing.

Scientists modify the DNA of a seed to make sure that the resulting plant produces the desired features.

Non-genetically modified seeds are grown through pollination. They can be grown in two different ways: as open-pollinated seeds or as hybrid seeds.

Seeds of non GMO heritage are popular, and it’s not surprising at all.

These special seeds perform so many wonders for home gardens, which is why more and more people are adopting it.

There are many benefits and characteristics of seeds that are non GMO, and you can make a more accurate decision.

Want your family to eat healthy and fresh vegetables? Make some money from the crops or save on the cost of gardening? Make a change to non GMO heirloom seeds and you will be happy for it!

But before you make the change you should first consider whether the non-transgenic seeds are really right for you.

Below are listed the various features and benefits of heirloom seeds. Ensure to carefully read each one before taking a decision.

Open pollination: these are subjected to natural pollination so that they can maintain the quality characteristics of their parent plants.

This converts them into true-type varieties which are very similar in appearance and taste as their initial source.

Non-hybrid: The seeds are pure in nature. They do not cross with other types of plants to make sure they maintain their “true type” features.

Non-GMO: GMO means “genetically modified organism” or living things with genes that have gone through modifications in a laboratory.

They are not organic and their safety for human consumption is often in doubt. Heirloom vegetables and seeds, on the other hand, are not GMO.

All of them are natural, so they never passed through genetic changes.

Pesticide Free: The seeds are handed down from one generation to another, most of which are between 50 and 100 years old.

They were planted using organic and natural methods, hence no pesticide was used in their production.

Single purchase: You need to buy a seed packet just once and you’re done!

This is possible because you can save some of the seeds from your harvest and keep them well in mason pots.

When the planting season returns, just use the preserved seeds and save the seeds from the harvest again.

It really is an easy cycle that will lower the cost of gardening in the long run.

Reusability: As mentioned earlier, seeds that are not GMOs can be reused.

Simply implement the cycle continuously to obtain a limitless supply of seeds forever.

This will not only save you a lot of money over the years, but it will also be helpful for the environment.

Health: Because these seeds are not sprayed with pesticides or tested in laboratories. You can be guaranteed that your family will eat safe, fresh, and healthy crops from the garden.

Profitability: There are diverse ways to make profit.

Just be sure to take good care of your garden so that you can produce the best possible crops for your business.

Many adorable selections: Non-GMO seeds also come in several varieties to meet the needs of each consumer.

Fruits and vegetables are available in small, medium and large sizes, striped and colored varieties, as well as sweet or acidic flavors.

Nature’s Path has remained independent, unlike brands such as Kashi and Cascadian Farm, now owned by General Mills and mega corporations Kellogg, respectively.

Rather They choose to remain independent and true to their values.

Organic Lundberg uses organic techniques which are eco-friendly to produce various types of rice from brown rice to organic varieties more unique like jasmine and also rice chips which are gluten-free.

Pacific Natural Foods: One of the many independent firms listed in the industry chart for 2011 designed by Professor of Michigan State University, Philip H. Howard.

You will find independently owned Pacific Naturals products in stores together with favorite companies that are not as Independent as they used to be.

The Pacific, based in Oregon, provides a huge variety of broths, soups, walnut milks and other plentiful packaged foods.

At grocery stores all over the country.

Uncle Matt: Although it is best to squeeze fresh, you will find it difficult to see bottled orange juice better than Uncle Matt, which is sold in supermarkets across the country.

As a proponent of mandatory labeling of GMOs like many others on this list, the Florida-based firm provides organic juices without the fun (such as artificially improved “flavor packs” sometimes used in other “natural” brands).

Dr. Bronner: A staple food from a health food store, Dr. Bronner has been one of the very vocal and economically generous sponsors of mandatory labeling of GMOs.

“If we do not gain the right to label and allow people to select non-GMOs,” CEO David Bronner told Mother Jones, “then everything will become GMO.”

Traditional Drugs: While most tea firms are full of mysterious “natural flavors” or artificial flavors, this company makes use of just organic, purely natural herbs in their formulas.

This makes them better than many tea companies like Tazo (owned and/or distributed by Starbucks with the assistance of Unilever &) Pepsi for health purposes. As well as to support an independent organic firm.

Amy’s Kitchen – Regardless of whether you are a fan of frozen food or not, it is difficult to deliberate on how this company performs its business.

They have not only remained organic and independent despite their impressive growth (now you can find them in many grocery stores), but also found time to create what is believed to be the country’s first organic fast food restaurant in California.

You can find them first in healthy grocery and food. the latter is now appearing in pharmacies such as Rite Aid.

In terms of organic and non-GMO spices, you cannot go wrong with Simply Organic.

Which manufactures cayenne, turmeric, cumin and other delicious foods.

It is also important to note that this brand is a much better option than McCormick’s spices.

Frey Wines: Organic wine can be difficult to find, even among the varieties on offer in stores.

However, purchasing a wine from a reliable organic source is critical!

A recent study discovered a glyphosate (a toxic herbicide) contamination in 100% of the wines analyzed.

Which raises other concerns, such as health-damaging sulfites and even the increasing possibility of GMO yeast in wines.

The study found certain residues of glyphosate in organic wines (the brands tested were not mentioned).

Equal exchange: a seller of handmade foods ranging from coffee and chocolate to teas & olive oil.

This company is outstanding for its commitment to principles of fair trade, small organic farmers and cooperatives.

What makes them unique is their fundraising program for children. Which allows parents and children to raise funds for local purposes (without giving support to unethical candy firms that are owned by large corporations in the process).

The term “heirloom” has risen in popularity in recent times, but what does it mean exactly?

“Heirloom” talks about the heritage of a seed, specifically a documented inheritance that is handed down from one generation to another within a community or family.

An heirloom variety of fruits, vegetables, or flowers should be open-pollinated (or pollinated by birds, insects, winds or other natural methods) and “truly reproduce”.

Or retain their natural characteristics from one generation to another.

Though certain organizations labeled vegetable seeds as an heirloom depending on dates, for instance, a variety dating back over 5 decades.

Seed Savers Exchange locates heirlooms by documenting and verifying the history of generations to preserve and transmit the seed.

Making emphasis on the link of the vegetable seed to a given category of persons.

(The varieties introduced into the US seed trade prior to 1950, meanwhile, are labeled “historical” on the Seed Savings Exchange.)

Although often organic too, the vegetable seeds of heirloom need not be. In most instances, heirloom plants don’t conform to USDA National Organic Program guidelines.

As they are usually grown by small gardeners who are using organic farming practices.

Vegetable seeds of Heirloom are a critical part of the country’s agricultural inheritance and help to make sure the diverse genetics of plant species.

The Seed Savers Exchange founded in 1975, has helped promote the movement for heirloom seeds. And continues its work to circulate, preserve, and sell rare seeds and heirloom to this day.

You will find many varieties of heirloom seeds in seed catalog and in our online stores.

Fedco Seeds (Waterville, ME)
This is a cooperative company in which consumers own 60% and employees own 40%.

Because the cooperative does not have a single owner, its primary goal is not profit. Hence its seeds and other products are quite affordable.

Seed Savers Exchange (Decorah, IA)
This is a nonprofit organization that works to save endangered heirloom garden seeds.

They focus on preserving the seed varieties which farmers and gardeners transport to North America.

When their families migrate and traditional varieties grown by Native Americans, Amish, and Mennonites.

Clear Creek Seeds (Hulbert, OK)
This is a small-scale family business that specializes exclusively in a variety of heirloom seeds. Which are open-pollinated e.g. flowers, vegetables, and herbs.

They also provide many variety packs for much more value. Such as the pack of pollinators and the salsa package.

Baker Creek Heirloom Seeds (Mansfield, MO)
This is a family owned business that offers an excellent catalog and website. With more than 1,800 varieties of flowers, vegetables, and herbs.

It is one of the largest selection of relic varieties in the United States.

Southern Exposure Seed Exhibition (Mineral, VA)
This giver over 700 varieties of vegetable seeds, herbs, grains flowers, and cover crops. Highlights include varieties that do well in the Southeast and mid-Atlantic.

And provide many unusual Southern relics such as yacon, amaranth, including collards, peanuts, southern-colored natural cotton peas, and okra.

To our amazement, Monsanto is still controlling the seed industry.

In a manner similar to the slugs and snails that invade young gardens at night.

Meanwhile, selecting the seeds responsibly will help keep the predators away and, hopefully, will do away with them.

In fact, learning about the plant and flower varieties that best suit your climate.

Will give your garden a huge advantage over pests and diseases to which it might be subject.

Select the seeds of some of the non-GMO seed agencies listed below for your garden this spring and summer, and benefit from the fruits of awareness and gardening!

Exchange of seed savings
Founded in 1975 in the midst of the first modern movement back to Earth, the Seed Saver Exchange has offered heirloom seed varieties to any kind of gardener.

The non-profit organization is dedicated to promoting and preserving the “Culture of America’s Heritage”.

Along with vegetables, culturally diverse but endangered species for future generations via the collection, cultivation and exchange of heirloom plants and seeds.”

Rareseeds
Also referred to as Baker Creek Heirloom Seeds, Rareseeds is a firm that offers some of the rarest varieties of existing heirloom.

With more than 1800 seed varieties on offer, the firm prides itself on having vegetables such as Okra Coffee, Black Incan Corn, and Marble Beans on its list.

Collect your own
Saving your own seeds is the most sustainable way to keep the garden free of GMOs.

Be sure to save the seeds of the plants that were planted with varieties of heirloom obtained from relatives or friends.

Who may be responsible for their authenticity, or from seeds purchased from a reputable seed company.